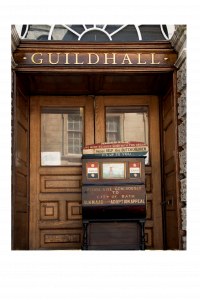 This street piano, often called a barrel organ, was wheeled around Bath and several surrounding towns and villages in 1945, to raise money and create publicity for the ‘Alkmaar Appeal’, a fund-raising effort to help children in that Dutch City badly affected by the impact of the Second World War on the Netherlands.

In 1946 the instrument was presented to City of Alkmaar as a token of abiding friendship, and has been on display in the Town Hall there ever since.

To help mark 75 years since the end of the War, the little instrument has been loaned back to Bath, serving as a reminder of the friendship which continues between the two historic cities, and once again helping bring the two communities together.

The barrel organ will stay in the Guildhall in Bath for a year, before returning to Alkmaar in Summer 2021.

The Bath-Alkmaar barrel organ played a significant role in one of the most remarkable stories to come out of the Second World War: the forging of a close bond between two previously unconnected cities in different countries, Bath in England and Alkmaar in the Netherlands.

In 1940, as Hitler’s invasion of the Netherlands was almost complete, a young Jewish activist, Elias ‘Eli’ Prins, made a brave escape from his hometown of Alkmaar.   Crossing the North Sea on a small fishing boat, Eli spent the rest of the War living in Bath, becoming a well-known and popular speaker, and helping the Allied efforts to liberate Europe. 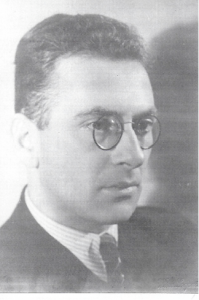 Eli Prins, whose escape to Bath began the link

In the Winter of 1944-45, when much of the Netherlands suffered a terrible famine, a nation-wide appeal to help was launched in Britain.   Special permission was granted by Queen Wilhelmina of the Netherlands for Bath to ‘adopt’ Alkmaar for its fund-raising efforts. A city-wide ‘Alkmaar Appeal’ was launched by the Mayor of Bath and several community groups in March 1945, remarkably when the Dutch city was still occupied by German forces.

To draw public attention to the Alkmaar Appeal, a second-hand street piano was bought from a clergyman, Canon Wintle of Lawshall in East Anglia, who had set up a small business repairing these instruments to help raise funds for his Church repairs.

Decorated in Dutch national colours, a painting of a windmill, and with suitable message signs added, the little instrument was wheeled around Bath on a two-wheeled handcart and put on the back of a truck for collections in neighbouring towns. 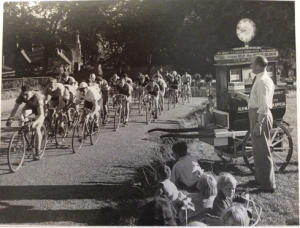 The barrel organ in action

The Alkmaar Appeal finale was a Dance held in the Tea Rooms in July 1945, a few weeks after VE Day.  A very speculative invitation was sent, more in hope than expectation, to the Mayor of Alkmaar, Jonker H van Kinschot.   To the delight of people in Bath, Mayor Kinschot gained special military permission from the recently victorious Allies to fly over to attend. 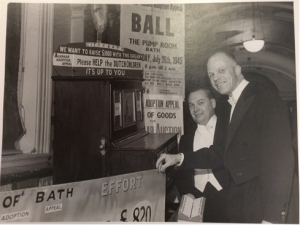 In December 1945, 50 children from Alkmaar came to Bath to help them recuperate from the effects of the War.  The following Summer, 100 children from Bath were invited back to Alkmaar in exchange.  For over 75 years these visits, and exchanges have continued, involving thousands of people, from schools, community, sports and musical groups, as well as regular official civic visits by the Mayors of each city.

The barrel organ was presented to the Mayor of Alkmaar in 1946 as a permanent token of friendship.  In exchange, Alkmaar presented Bath with a fine brass gong, which can still be seen in Bath’s Guildhall, just outside the Council Chamber on the first floor.

The moving story of how and why Bath and Alkmaar became linked has been told in full for the first time in a gripping new book by author, Aletta Stevens.  You can find “The Remarkable Journey of Mr Prins” online or in your local book shop. 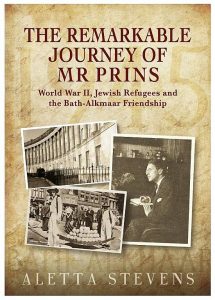 An instrument both musical and mechanical.

The Bath-Alkmaar barrel organ was manufactured at the turn of the 20th century by the Pasquale Company of London.  It would have been hired out to “organ-grinders” and wheeled around the streets of London to earn them money.

Anglican priest, Canon Wintle later bought up many of these humble instruments, which by the 1940s were being left in sheds to rot, or simply broken up.  The clergyman and his small team reconditioned them and either rented them out, or sold them, with the proceeds helping fund his Church repairs.

The music is produced in a similar way to a mechanical music box.  As the large wooden barrel with hundreds of small metal pins nailed into it is slowly turned, the pins activate hammers which strike metal piano wires, sounding the notes.

Inside the barrel organ

The barrel contains 10 separate tunes, literally tracks, as a turn of the small handle on the side moves the barrel along so different pins are engaged.  Depending on how fast the operator turns the crank, each tune lasts about a minute.

The tunes were put on this barrel by Canon Wintle’s workers, and include classic tunes such as ‘Alice Blue Gown’ alongside contemporary hits from 1945 including Glenn Miller’s ‘American Patrol’.

The little barrel organ has once again helped bring people in Bath and Alkmaar together, as both cities have worked together on the project of bringing the instrument to Bath, and helping with its repairs.

Special thanks are due to Alkmaar’s Mayor for granting permission for the loan.  Thanks also to the Rotary Clubs of Bath and Alkmaar, Jaap Schuurman of Stad Alkmaar, to Richard and Tom Dean of Dean Organs, to the Charter Trustees in Bath, the Mayor of Bath and the Mayor’s team, to Guildhall staff for their support and interest, and to the many people in both cities who helped raised the funds to make the whole project possible. 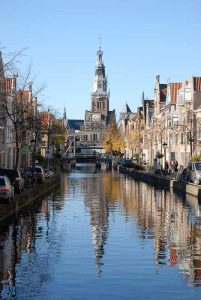 Image © Mindert Drenth. Alkmaar is a city in the Netherlands, in the province of North Holland. It is world famous for its traditional cheese market, and for tourists it is a popular cultural destination.

Bath has four twin cities: Aix-en-Provence in France, Alkmaar in the Netherlands, Braunschweig in Germany and Kaposvár in Hungary. In addition, the city has a formal friendship association with Beppu in Japan.  All have active twinning associations in Bath.  If you would like more details on them and their activities, contact the Mayor’s Office: mayorofbath@bathnes.gov.uk