*** The Educational Resources are currently being updated, certain sections will be unavailable or incomplete ***

Welcome to the Bath-Alkmaar Educational Resources section.  The following downloadable material has been brought together to help teachers use the Bath-Alkmaar origins story as a stimulus across several curriculum areas.

Elements of the material might well prove suitable for pupils from Key Stage 2 upwards, for use in subjects including:

A full version of the Alkmaar story is available elsewhere on this website, although it does not contain all the details on what happened in 1945 in Bath, as the War ended.   We have pulled together some of this less-well known material and included it in the Resources.

The Bath – Alkmaar Twinning Association is very willing to provide speakers who can give presentations on the story.  Please contact us  and we will arrange for someone to visit.

There are also places in Bath linked to the story which pupils can visit: details are given in the resources. 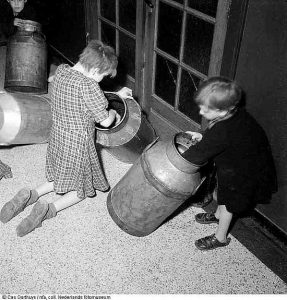 In the Netherlands, the winter of 1944-1945 was one of the harshest on record. During this time a large part of the country suffered from severe shortages of food and fuel which in the end would directly result in the death of some 20,000 civilians. The famine, known as the ‘Hunger Winter’, would last until the surrender of German forces in May 1945.

These problems had been foreseen for a long time. In September 1944 the first warnings of an impending food shortage reached the Dutch government in exile in London. Initially no action was taken. The Dutch officials and the Allied high command had hoped that the northern part of the country would be liberated after the successful completion of the Allies’ ‘Operation Market Garden’. This was not to be the case. Operation Market Garden failed and the country was divided into an occupied northern half and a largely liberated southern half.

In September the Dutch government in exile appealed to the Dutch railway workers to go on strike in support of Market Garden. The strike was intended to cripple the Dutch infrastructure and prevent the German army from quickly and effectively moving forces and supplies to the front. 30,000 workers responded to the call and went on strike. This created logistic problems for the German troops but also contributed to the already existing food shortages in the Western provinces.

Reprisals by the German occupiers aggravated the situation. The German military took control of the railway network and cut off food and fuel transports to the Northwestern part of the Netherlands for six weeks. The ensuing famine, known as the ‘Hunger Winter’, would last until the final surrender of German forces in the Netherlands in early May 1945.

“Along the road we saw a lot of people wrapped up in all kinds of shabby old clothes, trying to keep warm, some pushing baby carriages with a child or a little bit of food or clothing.  They were walking from farm to farm looking for food.  But they had to spend such a long time on the road, they seldom came home with anything; they ate it on the way.”
Bert Bochove

“Food was becoming increasingly scarce, and the typical daily diet consisted of fake tea made with cherry leaves, fake bread made with ground peas and potato starch, and fake meat made with barely, oats or turnips.”
Ernest Cassuto

From Wikipedia:
Food stocks in the cities in the western Netherlands rapidly ran out. The adult rations in cities such as Amsterdam dropped to below 1000 kilocalories (4,200 kilojoules) a day by the end of November 1944 and to 580 kilocalories in the west by the end of February 1945.[5] Over this Hongerwinter (“Hunger winter”), a number of factors combined to cause starvation of the Dutch people: the winter itself was unusually harsh and the retreating German army destroyed docks and bridges to flood the country and impede the Allied advance. As the Netherlands became one of the main western battlefields, the widespread dislocation and destruction of the war ruined much of its agricultural land and made the transport of existing food stocks difficult.

The areas affected were home to 4.5 million people. Butter disappeared after October 1944. The supply of vegetable fats dwindled to a minuscule seven-month supply of 1.3 liters per person. At first 100 grams of cheese were allotted every two weeks; the meat coupons became worthless. The bread ration had already dropped from 2,200 to 1,800 and then to 1,400 grams per week. Then it fell to 1,000 grams in October, and by April 1945 to 400 grams a week. Together with one kilogram of potatoes, this then formed the entire weekly ration. The black market increasingly ran out of food as well, and with the gas and electricity and heat turned off, everyone was very cold and very hungry.

In search of food, people would walk for tens of kilometers to trade valuables for food at farms. Tulip bulbs and sugarbeets were commonly consumed. Furniture and houses were dismantled to provide fuel for heating. From September 1944 until early 1945 the deaths of 18,000-20,000 Dutch people were attributed to malnutrition as the primary cause, and in many more as a contributing factor.

To print page, click here to load pdf file and then print

The Alkmaar ‘Barrel Organ’ (actually a barrel piano) was wheeled all over Bath, through its streets, round the football pitch at Bath City FC, and taken to surrounding villages, all to help raise funds for the Appeal.

It became rather famous, regularly mentioned in local press reports.

The venerable Alkmaar instrument has not been played for decades.  But the barrel organ has temporarily come back to Bath, to be tuned, which gives an idea of the sort of sound Bathonians would have heard as Jimmie Wills and his friends in the Bath Rotary Club and ARP collected money in 1945.

To print page, click here to load pdf file and then print

Ways that Bathonians raised funds for the Alkmaar appeal in 1945

The following examples all come from contemporary reports in the Bath Chronicle:

The people of Alkmaar was amazed and touched by what Bath was doing.

“In our hearts we are deeply moved by the Adoption Appeal from your town, an appeal which we most gratefully acknowledge…May the ties of friendship which bind Bath and Alkmaar…ever become stronger and bear witness to our common thoughts and ideals

Letter to the Mayor of Bath from Burgomaster van Kinschot, June 1945

“Hallo Bath!  On behalf of the people of our town of Alkmaar, we convey to you, the people of Bath, our sincere gratitude for what you are doing and have already done for us.  Clothes for our poor children and adults, furniture, blankets, money and such things which are now on their way to us – we are in need of all of them.  But, most of all, we needed your sympathy, and we are glad to have won it.”

A message, in English, published in the Dutch Resistance newspaper, “Het Parool”, reported in the Bath Chronicle July 1945

To print page, click here to load pdf file and then print.

To print page, click here to load pdf file and then print (this feature will soon be implemented)

To see the material, as a printable pdf file, click on the appropriate link.

This section will be updated soon.

The Dutch children who came to Bath, then and now

This section will be updated soon.